So this is a BETA but it's better than decent. I didn't play it to win it, just to check it out; 5 bots having my back.

He didn't have a selection pic, which isn't a big deal: 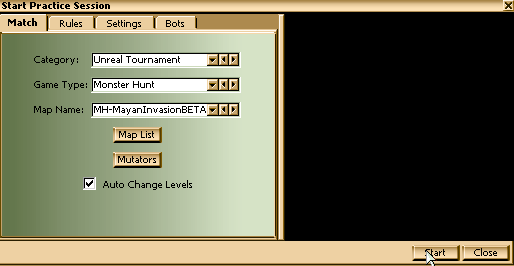 It's a beautiful map: 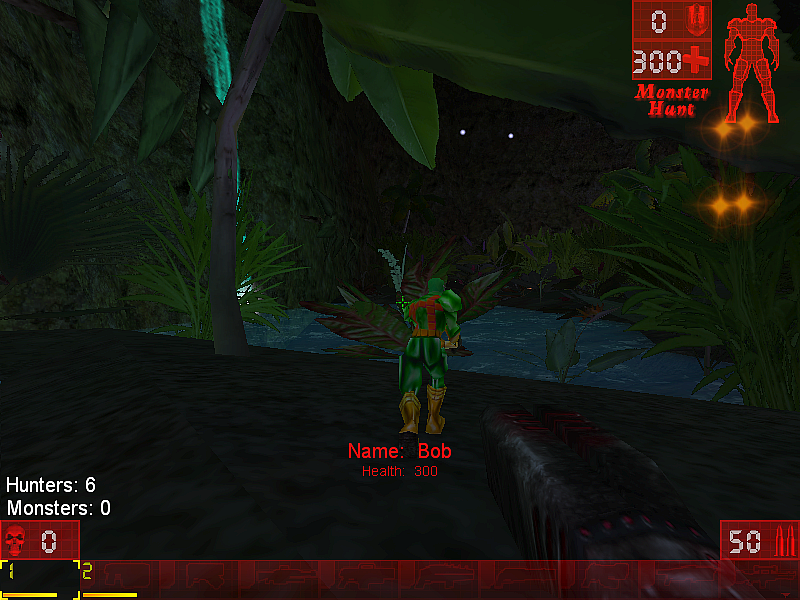 Lush foliage, plenty of fighting room but combat is slightly hampered by the lack of a good visual field (lotta plants) which makes for a more fun battle. You actually have to hunt a bit to find what you're looking for.

When I first got on the map there were no monsters, which I thought was due to it being a testing map. After about 1 minute messages started popping up: 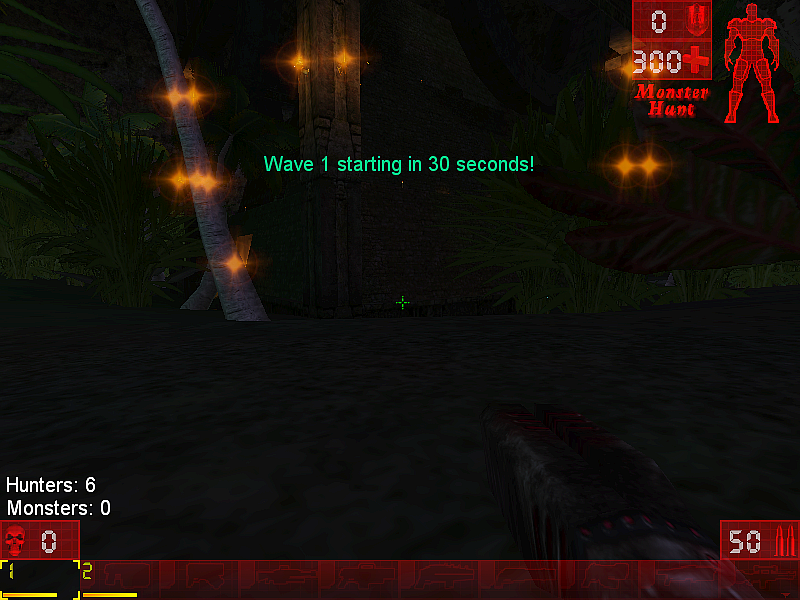 It basically gives you some time to get familiar with the area before the attacks begin. Very cool!

Monsters come in primarily from a central tower... 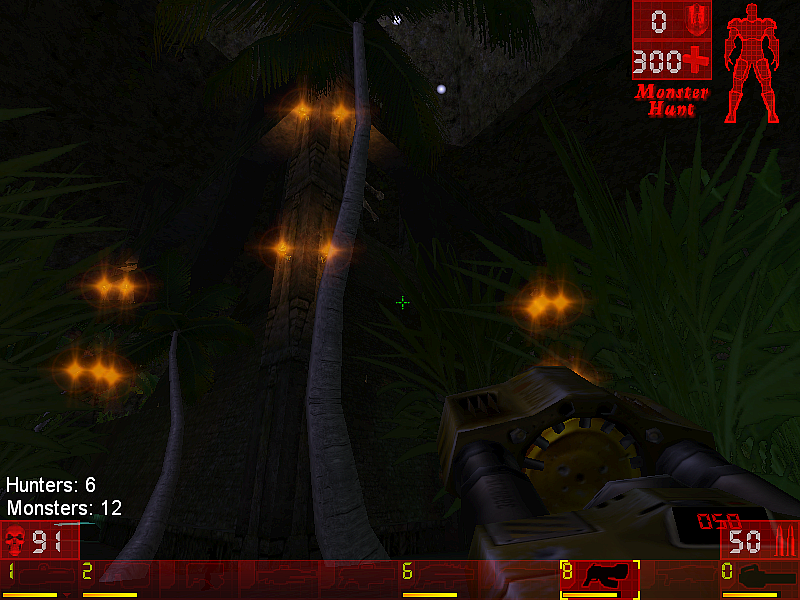 ...and 2 lakes on either side of it provide Slith. I only played through the first wave, so I expect there may be more variety of monsters as you progress, but I only saw mantas & slith & skaarj scouts so far as that went.

Something buggy about the mantas. Not bad, exactly... but I've never seen mantas fight that way before.

The central tower has no stairs, the only way up is a series of glowing blue jump pads around the sides of it, 2 per level until the top: 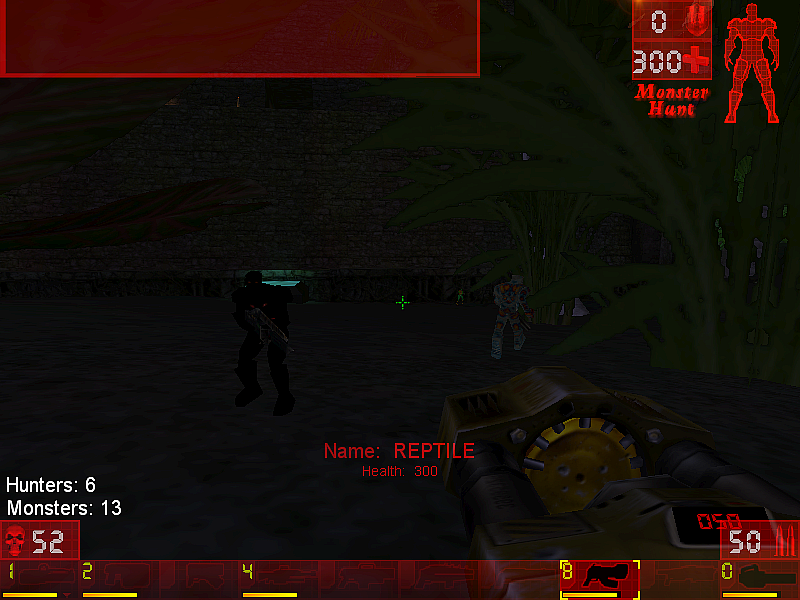 There's what looks like a door at the base of the temple, on 1 side: 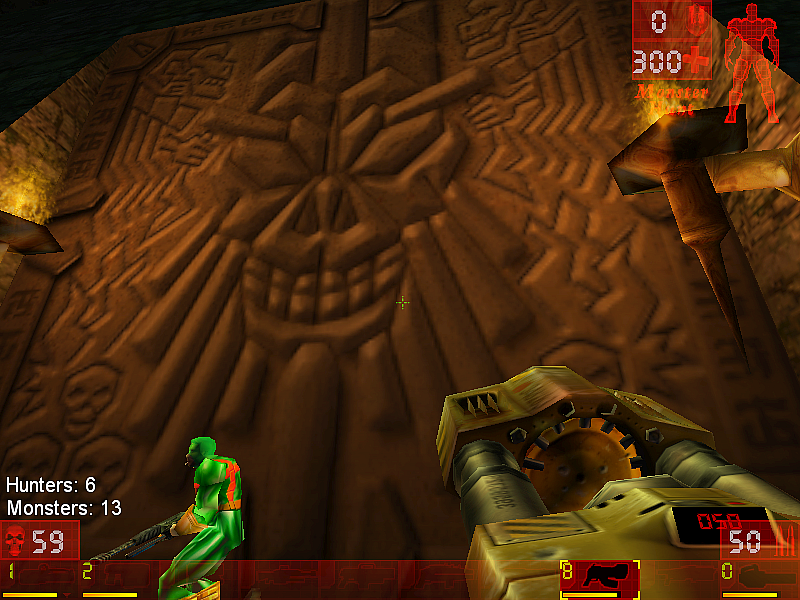 I'm guessing closer to the final wave there's larger monsters that would come out of that. I didn't play it long enough to be sure.

This map has no discernible bot-pathing, which is generally a negative with me... 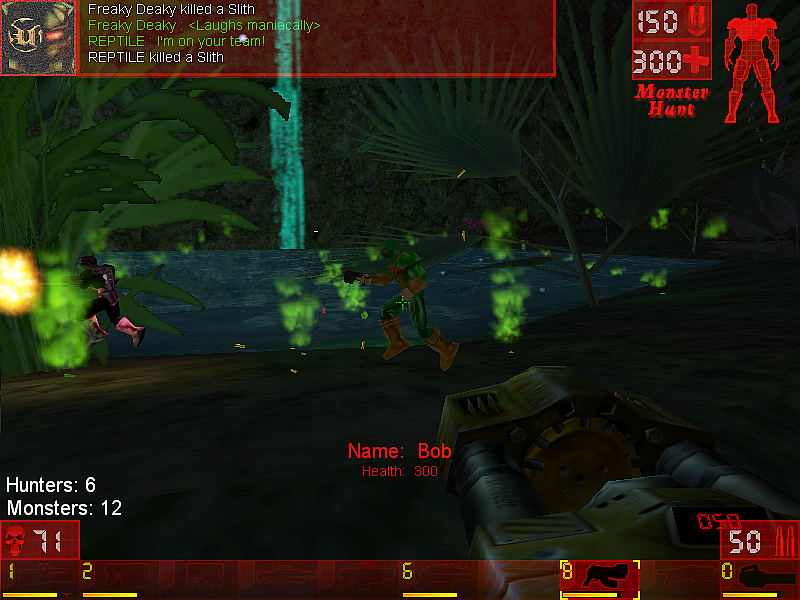 ...but my guys handled it okay. I helped a bit, going up the tower to grab weapons and then bringing them back to my troops.

This is only the BETA, but I like it. Would be better with bot pathing, as would all maps.

I was doing small changes here. Too much bugging sight those giant trees... the rest seems OK.

Bot pathing let's say is functional (tested with my Bots which are somehow closer to originals).
I checked chains with triggers and looks like they work (I did not have patience to see end) but we have Bots reaching on top, I don't know if it need to make them jump down to crawl again area... maybe a PowerNode (or more) to make them to load all weapons. Maybe player will need to participate at hunt if Bot fail some monster.

How is A.I.__
A few special nodes are protecting MonsterEnd from top. If Bot has an enemy won't see path to End so it needs to fight. However, if is blind at a moment can pass and will move to end where might not have changes to hunt some creature (giant ones).
Creatures smaller (Skaarj, Krall, Sliths) have chances to hunt back player as long as they can track pathing selecting a random hunter as target. Titan not really, not Queen, and very poor Manta, Warlords depending on battle. PowerNode won't help if Bot has been loaded and is racing to the Top and that's why I guess is not for such map.
If player attack a Giant monster asking Bot for support it might work. Bot killed has chances to find enemy while is covering player. If one Bot has been boosted in a wild area (not each point has reachable positions to not load engine abusive) this Bot will return at a moment in Path-Net as long as NoLost actor has been added (it might be adjusted if it needs). I added it for common Bot because MBot can recover Navigation from 3500 UU native if was blown into wild zone but has visual contact with a PathNode.

The second way is having 3 heat points (Armors by example) with a well computed respawntime in order to make Bot to crawl as in DM.

It certainly looks cool to me!

Somehow yes, and being in a decent size (except decos) it might run well and that's why I was interested.

Else: I will create a private G00gledrive link (a folder) with such small remakes containing new Navigation stuff for playing Off-Line, and I can point you to those places presuming that you have files coming with original and only Map file is requested if you'll need home toys.
Building and Moved...
My UT Mapping works...
Top

My 1 problem is I don't know how far it goes. Each time I've played I've popped in with a varied number of bots, the last time to make up for the lack of weapons anywhere outside of the temple I used the "Fully Loaded" mutator to arm everybody.

I haven't gotten past the 1st wave, mainly because it's the kind of map that might do better online as the lack of pathing being what it is the bots won't goto the jumpads to get to the areas of the temple the monsters spawn in. Mainly they only get the ones that wander around that jumped from the temple to the ground, or the slith that come in from the lake.

I may give it a go again tonight, when there's not much to do at home to distract me and see how long it goes before the 2nd wave. Not one to test maps in UnrealEd, and even if I were I don't know how to check in there to see how many waves there are.

A lot, but not all, maps that have monsters attacking in waves usually flash messages like "you have {NUMBER HERE} to go before the next wave" but I haven't seen any sign of anything like that yet.

It's a beta and I like it... but there's something about it I can't quite put my finger on.

Prior wave might be ended before new one to start - at least in Counter won't get broken... A small mutator used by me is fixing Counters but it takes time to finish waves... See that...
Building and Moved...
My UT Mapping works...
Top

After spending aprox. 3 hours hunting there (my bad to not triple check MonsterEnd) I figured why game doesn't end, I have updated setting (bad done) and I solved that null ON-Line sound "MonsterKill" because "Announcer" + Special Events are not friends - there are more Levels using mission sounds which nobody can hear them ever in servers. Eh... Folder has been updated now you can swap whatever you need.

Note: After testing it properly to made sure about full functionality we can speak about a map added for MH community. After coming from job I'll do an accelerated test to gain results faster as long as I don't like to waste hours for tiny details.
Building and Moved...
My UT Mapping works...
Top

Don't feel bad. I just found tons of errors with my servers and have started to fix them but it will take time. I look forward to trying this INVASION! Please do keep up the good work and bug me to test too. Say when.
~Peace~

And some Bsp (not sure if were there in original or created after pathing and the rest) have been solved... hunting others...
Building and Moved...
My UT Mapping works...
Top
Post Reply
9 posts • Page 1 of 1