Anyone that's played online has probably thought there should be some general rules for how all players should handle themselves when interacting with others. In more frustrating times, everybody's probably thought of rules that were completely innappropriate but seemed to fit your more stressed mindset.

This is the place for those rules. Please share your most ridiculous thoughts of how online play should go, number them however you like.

Rule #1: Do not shoot people on your own team unless they annoy you.

Rule #2: The one that didn't have the good sense, or skills, to get away from the boss monster is the one that most often has to kill it.

1) In a server with 1 player, yeah, you read well, a single player joining, I looked at some crappy message: "Hunt together with your teammates...." even "No shooting mates... bla bla", and again later "This is a TeamGame". I was impressed about shooting an unexistent team or a TeamGame with no team, but anyway...;

2) In other one I found some rules scrolling, something like "Hunt normally in maps, don't cheat with jumps or ban...". Looks like somebody cares about this, a few admins joined (only with client game - they are gone in town drinking beer) might scare players about "watching". I was wandering, if admin don't want shortcuts delivered with jumping, why isn't removing the crappy DJ ? One of simple answers (I risk to post mapping "goodies" again), the mapper who delivered this creation didn't added something logic, just jumps and spam without nothing related to hunting and for this reason other old good maps might be slaped bad. But the trash is still loaded and funny rules are bugging HUD useless;

3) Rule ? "Kill all monsters or ban" - yeah, I want to see all monsters killed in some ATAA series, LongCorridorX (x = A to whatever) without spam limitations and also a time limit delivering only losing game if this rule is respected. So, watch out, you can be banned if you don't lose the match, right ?;

4) Warning about respecting rules "Admins are everywhere...". I was looking in my bed with a baseball bat if isn't one there because I really need to sleep relaxed, cough.
Actually I don't remember too much about a server started by itself without an admin (or assumed admin), heck. Could be better to inform noobs about "LOGS are saved, problems might be fixed if are described in game" or like this, but I think some "admins" don't care about troubles, they just want rules respected doesn't matter trashes loaded bugging game.

____
I, as player, I demand rules for admins:
1) If you need players:
- load only quality maps in server;
- give them a minimun of ammo in case of maps with 0 ammo (retarded craps) or remove them;
- do not make The Luck to frustrate a good player by a noob (is a shooter game not lottery);
- fix or remove maps with BSP holes (might bug game);
- do not bug me with chapter 3) up described (bots aren't killing all monsters anyway

, ban Loque and Tamerlane);
- remove a "nice scoring" and "stats" from teamgame because will result in non-TeamPlay, just a score hunting;
- camping ? If you don't need campers load good maps with monsters hunting players, will inflict automatic rule: Run or Die !
- others ?
2) If you need stable server:
- get rid of 50 MB packages (or non-packages, not sent by server to client-player);
- get rid of maps done by guys who cannot read tutorials;
- um... nvm (I was thinking at something but I changed my mind);
- do not mess up with 20 MB of accesed nones by some "works" spaming server and even ME (The Nice Player,

), hidding them is not a solution...;
- if other players need music tell them to launch some music in their PC, nobody need to listen the same song (will be older in 6 months

and not everybody have the same tastes).

Ah, I think is time for a break, will talk about this subject if more people want this, or they are free to share their opinions as well. I'm sorry if I disturbed too much.
Building and Moved...
My UT Mapping works...
Top

Not too silly, Nel.

Rule #4: When you know a Skarrj is nearby but can't see it, follow the smell.

But, you know, I was amused at first look. Later I noticed why players have strange behavior. Even some of them told in game their thoughts. Configuring a server isn't an easy job as imagined. Might be hard enough, you need to deal with everything. Anyway, players sometimes are pushing limits acting like clowns... Need a selection technology making good people to stay and jerks to leave, at least for rules impossible to be respected I wish more luck to that admin and a nice sleep.

Continuing rules:
If you are alone in a server using an old mod, just use walk, increase a bit the volume (for any speakers) and listen to environment (turn off the music if is bugging you - my favourite song in fixed maps is NULL48.umx,

Rule #89: When you get killed for no good reason, blame the nearest Nali.

Rule #007: If the first time you kill a monster that doesn't make him stop trying to kill you, kill him again or run for your life.

Rule #666: Do not use bad language / profanity when you play with others. That's for the bots with their nasty voicepacks to do.

Rule 42: No matter how adorable a monster is, doesn't mean you can use it. 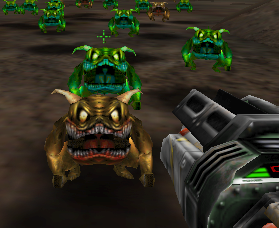 Tried using them a couple years back but the way they fight/die messed with the monster counter and exit. Just tried them on another map, like the 15th challenge into it, and they keep freezing the game and, by randomness, my computer.

Is not bad to see new stuff... the problem is: They are coded worst than Epic's original content.
Nothing changed, the mostly ruined... important functions altered for 0 reasons...
Keep testing pawns, I won't insult my PC with such stuff... OLEEE !

The only reson for visiting UT places with files hosted, is for doing a check for new versions of certain mutators. For pawns ? My Interest = 0.03.

I toyed with some Weapon-Holder (a child of Skaarj). But:
- doesn't start as bIsPlayer to bug controllers - works different;
- is not stucked in animations as XIDIA and CO.;
- He doesn't need a weapon if has 0 enemy - he get weapon from pocket only if need it without messing up renders to throw a crap without HUD in ON-LINE play - this time I set other technology;
- might be confused with a Bot - Looks identically - just a few moves are different betraying the class - end of good things - hang on later;

- It develops accesed nones when it wants to get a Skin - need something tweaked there for factories usage - but he gets random colored skins using defaults;
- It isn't very instructed to MeleeAttack being a very desired Weapon-Holder.

For conclusions, I'll toy with such pawn when I'll be interested more, now I'm only playing.
Building and Moved...
My UT Mapping works...
Top

Where it stands with ths particular one, I never downloaded a new verison. Even though they didn't work out so well back when... I didn't delete them.

Thinking I could use them for something else down the line.

Might be worth a look, or at least to ask around, to see if anyone ever updated them. Made them more playable than this version I have.

Maybe there is other ideea. Contact author and ask what exactly is about these pawns. If answer is 0 (zero) or the dude is vanished you can try to screw them in a better way.

Not everybody understood monster's states but decided to "code" pawns... lol. May I tell you a secret ? Mods and pawns are exactly like maps. You remember those MA "maps" ? This is exactly a mirror into coding pawns and mods as were those maps, more exactly and corectly defined trash-attempts. Any dude on this planet can code an U file used by UT, but not all results are wise and done well respecting a minimum of coding rules. The same subject is for weapons and others, not everybody can deal with them doing the mostly feign coding.

You will see some day and probably will understand what's going on. I'm sadly amused by those "players" claiming 15 GB of UT on HDD. Maybe 15% is indeed stuff, other ... just a fake feeling about stuff. And keep in mind I don't have insane coding skills - I think I did not pass the noob coding level and I noticed these I'm guessing too early.
Building and Moved...
My UT Mapping works...
Top

You want a bad pawn?
http://unrealtournament.99.free.fr/utfi ... erback.zip
It looks great, but it dies WAY too easily.

Medor updated his database with a bunch of new pawns recently:
http://unrealtournament.99.free.fr/utfi ... stom_pawn/
Some are great, and on a map I'm working on. Some suck. Some are either/or, as they have a boss class which is wonderful but the basic one is just so sad.

Those snakemen, at the link? They look cool, but they each only have 10 health. Such a waste!

EvilGrins wrote:You want a bad pawn?
...
Those snakemen, at the link? They look cool, but they each only have 10 health. Such a waste!

No, I don't want bad pawns... I just got rid of them last time.
Speaking about monsters, at least if aren't well coded I wanna feel some challenge (travel hunting player having a good normal size, armed, not 50, 100 health - the mostly 250 and me 100). So, I have a few Troopers for default matches except Trooper for GesBioRifle - I don't like that, RangedAttack is not so ranged as supposed.

10 Health is maybe a smart thing - could be a kinda lulu for SP maps and game-type where you start with 16 health or 20 having the mostly 0 weapons (neither a spoon).
When those monsters are ambushing player and kill him, there are chances to develop errors (not sure how fixed are these pawns, the mostly looking different and the same stupid old original codes). If monster is killed easily errors are unexistent - "great fixation" - but better than nothing

Return to “Off Topic Stuff”