Here there be giants...

Here there be giants...

I've always thought, long before there even existed such a mutator, that the best place for redeemer battles would need two basic qualities:

So, when I started skimming the maps I had to edit something like this, those were the main criteria.

That's why I chose CTF4-HallOfGiants. Just to put it out there, for those that care, I didn't get permission to edit this map. I did write the guy, he's got a website and everything, bu he never got back to me. Then again his site hasn't shown any activity in awhile. I don't even know if he got permission from the guy who made the original CTF-HallOfGiants, who I have no clue how to contact.

I credited them both for this map in the selection window.

The HallOfGiants maps, of which there are many, I'm a huge fan of. Most of them don't allow for gameplay on all levels, this one has it on most of them. The maps also don't feature giants... There are 4 Warlords on this map, setup to survive multiple redeemer hits, using unusual but powerful firepower. There's also 4 Skaarj, setup the same but with no projectiles. Both are from the higher levels of the map, which you can avoid if you'd rather not deal with them by not going up there.

You could kill the monsters easily enough with the translocator if you wanted but I personally view that as cheaping out. Usually not an issue if you're playing with instagib arena or redeemer arena.

This map is also good for instagib arena battles. Without that or any kind of redeemer mutator it has just basic weapons.

Why monsters? Anybody can edit any map but few deathmatch maps have monsters on them. If someone logs into this map online and there's not much of anyone else logged in at least they can fight the monsters. Sometimes between actual combat, if there's not much of anyone around, it's kinda cool watching the Warlord's slowly flying way up high when they're not actively looking to kill you.

Technically this map is a tiny bit incomplete. I included a new carcass for the Warlords but not for the Skaarj. Figure that as it's primarily setup for redeemers or instagibs any Skaarj killed won't have a body. A Warlord's carcass can survive at least one hit from a redeemer but the Skaarj carcass can't survive one. It's highly unlikely that a carcass would be left, unless someone is using standard weapons.

Other than that, I think all the files you need are here.

Re: Here there be giants...

Okay, finally gonna do this.

Replacing the 4 Warlords with...
· UTDMW: basically a Warlord bot that only gives 1 point when killed and I'm gonna alter it's projectile to redeemer
· Cyberus: unkillable monster with 2 weapons options, 1 I will make redeemer
· Xan Monster: practically unkillable when unarmed
· Grim Reaper: MOST POWERFUL MONSTER EVER... though I'll be removing 1 of its weapons, which is a swarming other monster 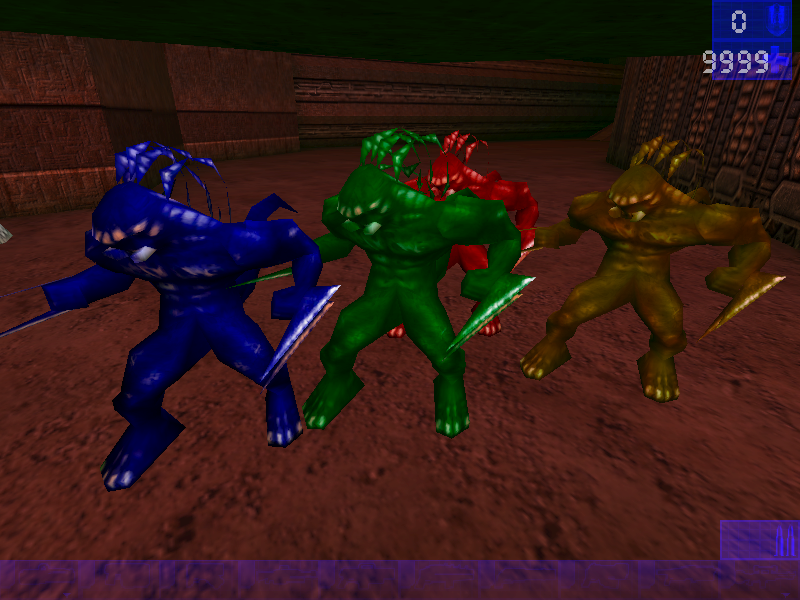 ...I may leave the "taste the rainbow" skaarj as is.